Social media has wormed its way into most aspects of our lives. It’s how many adults make friends, find dates, and even build career networks. It’s a virtual portfolio of our personal and public selves, and of course many of us want to show our best online. Which presents the question — how do you influence others, and how do others influence you on social media?

More than a third of Americans admit that social media has influenced their spending habits and that they overspend to keep up with their friends’ fun. Meanwhile, 64 percent of Americans are wondering how their friends can afford the expensive trips and trends they’re sharing online.

Online shopping has seen significant gains since the start of quarantine in the U.S. Recent reports find that 40 percent of consumers have increased their online spending to some degree. Food is the most popular item bought online, and 31 percent of Americans say they’ve ordered takeout. Hygiene is the second most popular online purchase with 27 percent of Americans shopping disinfectants and other items online, followed by clothing at 26 percent.

The feeling of needing to keep up with friends and perform on social media is at the core of many poor online spending decisions and can be detrimental to your financial health. A $30 concert ticket may not seem like much, but this builds a habit of overspending that can impact savings goals and unbalance your budget.

We surveyed 1,500 people to learn more about social media spending and found:

40% of Americans Have Made a Purchase Influenced by Social Media 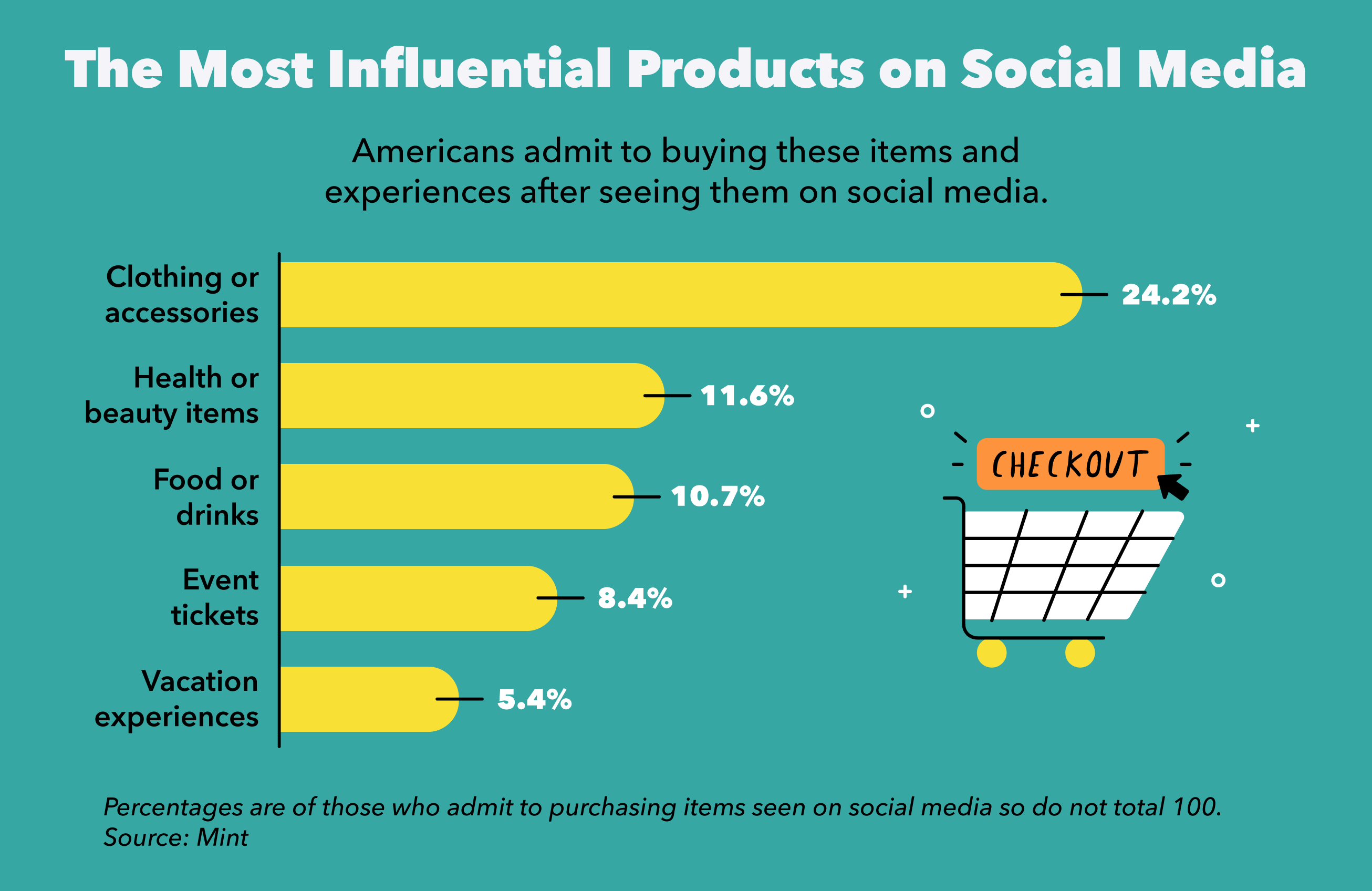 Our survey found that 40 percent of Americans admit to purchasing an item or experience after viewing something similar on social media. Clothing and accessories was the most popular category, with 24 percent of respondents sharing that they’ve shopped new looks on social media.

This percentage drops significantly to just 12 percent buying beauty and health products — the second most popular category. Vacation experiences were the least influential category with just 5 percent of Americans planning a trip because of social media.

Generation X (ages 35–44) is the most likely to purchase with social media influence. Forty-four percent of Gen X respondents say they’ve purchased something they saw online, with clothing and accessories keeping its popularity at 27 percent.

Additionally, 46 percent of women have purchased something they saw on social media while only 34 percent of men had done the same. Both women and men prefer clothing, but men put more value in experienced-based purchases, like events and vacations, than women seem to.

Clothing and Accessories Have the Most Influence

The fashion industry has built a huge market around the ability to control messaging and increase accessibility through visual apps. A quick and easy example of this is the 847+ million posts under #fashion on Instagram.

Even among fashion influencers, 42 percent shop directly through Instagram. The cycle of trending fashion grows as 86 percent of influencers purchase items they’ve seen other influencers wear, and are likely to then share the trend on their own account.

Nearly 20% of Users Judge Others for Sharing Their Purchases Online

While a large percentage of Americans admit to making purchases they see on social media, a fifth of respondents also admit to judging others for sharing their purchases online. Interestingly, younger generations were the most judgemental. Twenty-three percent of Gen Z users judged their peers’ purchases, while just 15 percent of those 55 and older judged others’ purchases.

It seems men are the most likely to judge others for sharing what they buy. Twenty-seven percent of Gen Z men admit to judging others’ purchases, while just 19 percent of the youngest generation’s women do the same.

Recent research suggests that there may be a direct tie between envy and conspicuous consumption on apps such as Instagram. Preliminary research suggests that many users believe others are posting their purchases to flaunt exclusivity, which builds envy and may support why so many users are quick to judge others. Those who reported high levels of envy were also more likely to consciously purchase items they had seen in an attempt to close the perceived wealth gap.

Social media trends are here to stay, and marketers are taking advantage of the authenticity of influencer marketing. A third of Americans admit to spending more than they can afford to keep up with their friends, and social media envy plays a large part in this influence. The best way to stay financially secure is to commit to a budget. Apps like Mint can help you plan and stick to your larger savings goals and combat the habit to impulse buy.

This study consisted of two survey questions conducted using Google Surveys. The sample consisted of no less than 1,500 completed responses per question. Post-stratification weighting has been applied to ensure an accurate and reliable representation of the total population. This survey ran during August 2020.

How to Use Envelope Budgeting to Increase Your Savings

How Much to Spend on Gifts This Holiday Season

How to Make Use of Abundant Seasonal Produce

4 Common Budget Mistakes and How to Avoid Them

How to Get Back on Track With Your Financial Goals

Why it’s More Important Than Ever to Track Your Spending

How to Have the Money Talk When You’re Dating (+ Printable Games!)

Money Manners: Who Pays for the Wedding?

How to Deposit Cash: Local Banks, ATMs, and Online Banks

A How-To Guide to Modern Tipping

4 Common Budget Mistakes and How to Avoid Them

How to Get Back on Track With Your Financial Goals

Why it’s More Important Than Ever to Track Your Spending

How to Have the Money Talk When You’re Dating (+ Printable Games!)

Money Manners: Who Pays for the Wedding?

How to Deposit Cash: Local Banks, ATMs, and Online Banks

A How-To Guide to Modern Tipping